Deb Haaland Is Plowing Ahead With Tackling Violence Against Native Women

She’s been on the job for only about a month, but Interior Secretary Deb Haaland is already clear about what one of her priorities will be: addressing the scourge of violence against Native American women.

Haaland announced Thursday that she is creating a joint commission, led by the Department of the Interior and the Department of Justice, to identify and curtail violent crimes targeting Indigenous women. Her action stems from the enactment in October of the Not Invisible Act, which calls on the Interior Department to oversee grants and programs to tackle a largely invisible crisis of missing and murdered Native women.

Haaland was a lead sponsor of that bill when she represented New Mexico in the House, and now that she’s interior secretary, she’s not wasting any time as she begins to address the situation.

“A lack of urgency, transparency, and coordination has hampered our country’s efforts to combat violence against American Indians and Alaska Natives,” she said in a statement. “In partnership with the Justice Department and with extensive engagement with Tribes and other stakeholders, Interior will marshal our resources to finally address the crisis of violence against Indigenous peoples.”

Haaland will work with Attorney General Merrick Garland to set up the commission. They will appoint 27 members, and the goal of the group will be to hold hearings, take testimony and gather evidence to help come up with recommendations for the government to combat violent crimes against Indigenous peoples.

The interior secretary’s latest action comes after she launched a new unit within the Bureau of Indian Affairs focused on investigating cases of missing and murdered Indigenous women. The unit was technically formed in 2019, but it didn’t do much. Within two weeks of being sworn in, Haaland announced she was significantly beefing up the unit’s staff and putting real power behind it. 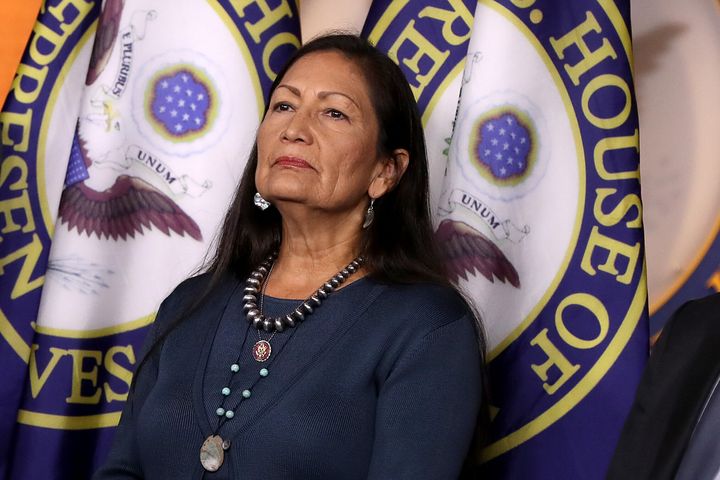 Native American women endure appalling levels of violence. About 84% of Indigenous women experience domestic violence in their lifetimes, and more than 50% experience sexual violence, according to the National Institute of Justice.

Beyond that, hundreds of Native women are mysteriously disappearing or being killed. At least 506 Indigenous women and girls have gone missing or been murdered in 71 U.S. cities, including more than 330 since 2010, according to a November 2018 report by Urban Indian Health Institute. And that’s likely a gross undercount given the limited or complete lack of data being collected by law enforcement agencies.

Ninety-five percent of those cases were never covered by the national media, and the circumstances surrounding many of those deaths and disappearances are still unknown.

“It’s so frustrating that for so many years there was no federal strategy in place to assist women, girls, and families facing unspeakable violence and harm,” Cortez Masto said in a statement. “I’m so pleased to see the Administration enact our landmark legislation, and I am confident it will help us deliver justice for the thousands of Native women and girls that have been targeted.”

“Too many families have faced unspeakable loss as Native women have gone missing, murdered, or trafficked and let down by the complex law enforcement systems in place,” Murkowski said in a statement. “I am hopeful that this new Joint Commission will be instrumental in protecting women and girls and will provide direct solutions to this pervasive issue.”

She added, “This is one more step toward healing an open wound which plagues Native communities.”