Congressional Democrats are signaling there will be a fight over funding for vote-by-mail as the coronavirus pandemic continues to impact day-to-day life and puts every state’s ability to conduct free and fair elections at risk.

Congress’ three relief bills for the coronavirus outbreak have only included limited funding for states to expand absentee voting, despite growing calls from election officials, state leaders and voting rights activists. Democratic leadership in Congress has highlighted the need, but faced opposition across the aisle. The last package included $400 million in election assistance for states to help prepare for the 2020 election cycle, including cleaning polling locations, but Democrats said that wasn’t nearly enough.

Now, Democratic leaders in both chambers want another chance to push through funding for mail-in voting.

“How are we going to vote in primaries and general elections? We’re probably going to need vote-by-mail and electronic voting and ways to get there,” Senate Minority Leader Chuck Schumer (D-N.Y.) said last week on MSNBC.

President Donald Trump has urged Republicans to fight against federal vote-by-mail funding. He claims people would “cheat” on their ballots and explicitly said that widespread absentee voting would hurt Republicans’ chances of maintaining power.

“The idea that you are willing to take the coronavirus … that’s putting 17 million people out work … and you’re talking about an election in November — I think you’re thinking about the wrong items,” McCarthy told reporters Thursday on a call, echoing Trump’s largely baseless claims about increased voter fraud.

But the ideological lines in the sand are weaker at the state level. State Republican parties have continued to push their supporters toward absentee voting, and leaders have advocated for expanded mail-in voting.

Five states ― Colorado, Hawaii, Oregon, Washington and Utah ― already have full absentee ballot infrastructure in place. They mail ballots to every registered voter. And some states, including those led by Republicans, are already prepared to move in that direction in November, should the coronavirus outbreak persist.

Ohio Gov. Mike DeWine (R), who was the first governor to postpone a state’s primary election date because of the coronavirus outbreak, has moved to a primarily vote-by-mail system in the state.

The Democratic parties in Wyoming, which canceled its in-person caucuses, and Alaska similarly conducted mail-in elections. Governors and secretaries of states in Iowa, Georgia and New Hampshire are also expanding options going forward.

“Basically, if you feel more comfortable voting absentee because of the outbreak or your inability or nervousness about just appearing in person to vote, you can vote absentee and obtain an absentee ballot,” New Hampshire Gov. Chris Sununu (R) said last week, supporting an expanded absentee ballot system in the state for November.

But making this leap will take investment. Wisconsin proved that expanding absentee voting is bumpy without the proper resources and planning. Republican legislators in the state said mailing every registered voter a ballot before the primary election was logistically impossible, and fought any expansions to mail-in voting in court. The state received so many requests for absentee ballots that roughly 10,000 were never sent out.

In an interview with HuffPost on Election Day last week, Wisconsin Lt. Gov. Mandela Barnes admitted the state was not prepared to handle the deluge of absentee ballot requests. 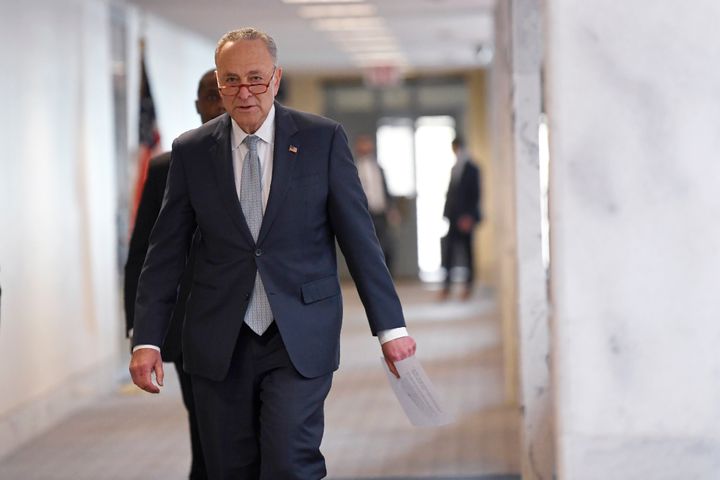 Sen. Bernie Sanders (I-Vt.) said he had spoken with Democratic leaders in the Senate about the issue and is confident they are prioritizing it.

“We have a Republican president and a Republican leadership in the Senate, and last bill that came out was a compromise bill,” he told HuffPost. “I didn’t get everything I wanted, the Democrats didn’t get everything they wanted, but there is a growing understanding that in the next bill it is absolutely imperative that states and the federal government have the necessary funding to make sure every American can vote in the next election.”

The question is how much of a priority this will be, considering other demands Democrats are making, like increased small business disaster loan grants, additional funding for protective equipment for health care workers and greater coronavirus testing capacities.

“We have real problems facing this country, and it’s time for the Republicans to quit the political posturing by proposing bills they know will not pass either chamber and get serious and work with us towards a solution,” Schumer and House Speaker Nancy Pelosi said Monday in a joint statement.