The Federal Court has ordered that a company associated with Melbourne business figure "Diamond" Joe Gutnick be wound up and declared insolvent amid allegations of millions of dollars of dishonest related party transactions.

The Federal Court on Wednesday appointed liquidators to the publicly traded mining company Merlin Diamonds Limited after a provisional liquidators' report showed it had just $1331 in the bank and liabilities of $13 million. 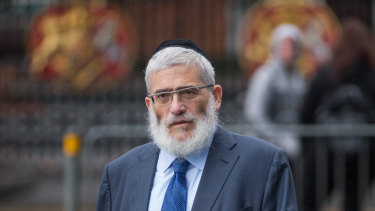 Joe Gutnick appearing at the Federal Court in Melbourne in 2017.Credit:Jason South

Judge Michael O'Bryan said a liquidator would allow for investigations into a number of inter-company loans, related party transactions and "round robin" payments that "have the appearance of uncommercial and dishonest transactions".

The Australian Securities and Investments Commission's had requested a liquidator to be appointed after an investigation into Mr Gutnick, one of Australia’s best-known business figures. The ordained Rabbi was once a regular on the BRW Rich 200 list and a benefactor to many Jewish charities. As president of a stricken Melbourne Football Club during the 1990s, his financial support kept the club alive.

However, The Age and The Sydney Morning Herald revealed in a series of stories in 2019 that ASIC was investigating what happened to $18 million in loans that allegedly saw money flow from publicly listed companies controlled by Mr Gutnick to a private company that he was also closely involved with.

In a scathing judgment on Wednesday, Justice O'Bryan said Merlin "does not appear to take its legal obligations seriously," had expressed "no contrition" for various corporate transgressions and faced a "strong prima facie case" that it had contravened the Corporations Act, particularly when it came to two related companies called Chabad and Axis.

At the relevant times, both Gutnicks were directors of Merlin, Chabad and Axis.

"Merlin's current directors have permitted Merlin to advance funds totalling in excess of $13 million on uncommercial terms to a company related to [Joe Gutnick and his son Mordechai Gutnick] for no real benefit to Merlin in circumstances where the loans were being fully impaired in the same year in which they were advanced," the judgment said.

The money was paid through a number of companies in "a series of round-robin transactions", constituting "a financial benefit" to the Gutnicks with no evidence that it was approved by the shareholders of Merlin.

"The transactions … cannot be characterised as having been conducted on reasonable arm's length terms. Further, the round-robin transactions associated with the issue of convertible notes to Chabad have the appearance of uncommercial and dishonest transactions."

These facts "strongly suggest that the current directors of Merlin have applied company monies for the benefit of entities related to Mr Joseph Gutnick and Mr Mordechai Gutnick," the judgment said.

Another Gutnick-linked company, Axis, received Merlin money and then loaned more than $9 million to Brocho, a private company controlled by the Gutnick family.

"There is a need for someone independent of the company to investigate the loans that have been made to Axis and the recoverability of those loans. In my view, that need is urgent," the judge wrote.

Deloitte was appointed as liquidator.