The local boss of e-commerce giant Amazon says Australian consumers are flocking to the site to sign up for subscription deliveries of household staples as the retailer ups the ante on fast delivery in major cities. 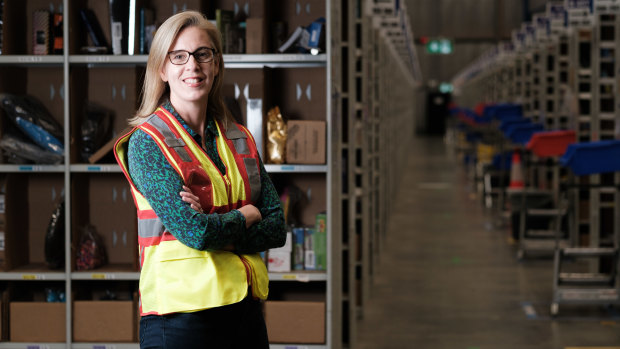 “I think what is most important [at the moment] is value – and we saw on Prime Day that people are willing to spend,” she said.

Grocery and household staples have been a drawcard for customers on the platform, with Menzies highlighting strong demand for the company’s “subscribe and save” feature, which gives users a small discount for scheduling repeat deliveries of things like toilet paper, dog food and soft drinks.

“We have thought a lot about this program and when it is useful — usually, it’s something that is a consumable. And it started off as everyday essentials in the kitchen, but now you can even get ‘subscribe and save’ on [printer] toner,” Menzies said.

It’s been close to five years since Amazon launched in Australia and while the company’s growth has been gradual, revenues surged throughout the pandemic to hit $1.75 billion in 2021. Its 2022 financials are yet to be filed with the corporate regulator.

Amazon is well-known for its superfast product delivery, with the company pioneering the model of parcels arriving in as little as two hours across the US.

On Wednesday, the company confirmed that years after making its first deliveries, it is now ready to expand free one-day delivery to hundreds of thousands of products in Melbourne and Sydney for customers who sign up to Amazon’s Prime membership program.

It will mean users in eligible postcodes can place an order, on some products as late as midnight, and have it on the doorstep the next day.

The focus on one-day delivery comes as Australia’s grocery retailers look at new ways of bringing stock to customers fast.

As a number of grocery delivery start-ups fall on hard times, supermarket giant Woolworths has been trialling one-hour deliveries through its Metro60 app. Meanwhile, both Coles and Woolworths have also launched business grocery platforms, looking to get a slice of the office supplies market.

While Amazon has contributed only a small part of Australia’s retail spending so far, analysts are watching its expansion closely.

“Web traffic analysis shows that Amazon has made significant progress through COVID – holding on to gains in contrast to peer retailers, where trends have retraced as the economy reopened,” Barrenjoey analysts said in a note to clients last month.

Its team predicts less than 30 per cent of Australian households have memberships for Amazon Prime at this point, meaning the retailer has a lot of room to grow.

Menzies says that from here, Amazon wants to “continue to challenge and raise the bar” for how e-commerce retailers can offer value for money in the Australian market.

Alongside product pricing, consistency of delivery will be a big factor in attracting new consumers.

“The other part of the value is reliable delivery — delivering when we say we do.”