Family members of New York seniors who died after contracting the coronavirus while in nursing homes told Fox News they believe New York Gov. Andrew Cuomo should donate the money he received from his 2020 book “American Crisis: Leadership Lessons From the COVID-19 Pandemic.”

“The best case scenario is the profits go to a fund for the grieving families. There should be a fund set up. They have a 9/11 memorial. … Losing, in New York State, 15,000 of our most vulnerable and cherished residents, family members, we need a memorial, and that should go to fund the memorial,” Daniel Arbeeny, who said his 89-year-old father died because coronavirus was introduced to his nursing home, told Fox News.

“A book publisher paid him seven figures and that was all based on a lie. So his pandemic response caused the deaths of thousands of nursing home patients that don’t have a voice,” Arbeeny continued.

Cuomo’s book sold for low to mid-seven figures, a “blockbuster sum,” Vanity Fair reported on Monday. However, Crown Publishing Group said Monday it has “paused active support” of the title due to a federal investigation of his administration’s handling of the state’s nursing home crisis, according to a report.

Sales of Cuomo’s book, “American Crisis: Leadership Lessons from the Covid-19 Pandemic” have noticeably declined in recent weeks as scrutiny of the governor intensified. 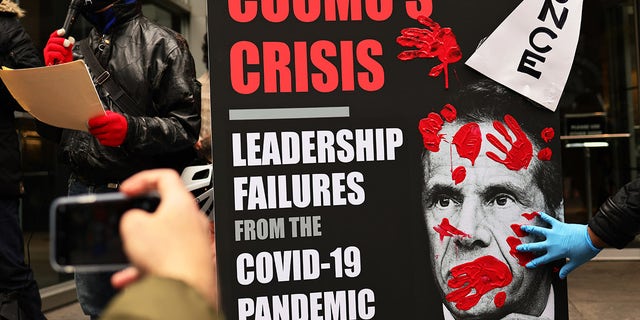 A person places his red painted hands on a poster of Gov. Andrew Cuomo’s book as people gather outside of his NYC office to protest against cuts to health care on March 01, 2021 in New York City. (Photo by Michael M. Santiago/Getty Images)

“I think it would be nice if the money was donated for a fund for families that are dealing with hardship … not necessarily just grieving families,” Grace Colucci told Fox News.

“A lot of families in New York City have lost their livelihoods,” Colucci said. “I actually lost my job last week. They had to lay a number of people off because of the difficulties – they’re struggling with with Covid.”

Colucci said she wants an investigation into how the Cuomo administration’s controversial March 25 directive to nursing homes originated.

“Especially when the only thing that was known from the beginning was that Covid was more dangerous to the elderly and the immune deficient,” she said. “Do I think he deserved a seven-figure book deal? Not on the basis of what the book’s about. … It should be moved to the fiction section.”

New York State Assemblyman Ron Kim, who has emerged as one of Cuomo’s biggest Democratic critics, questioned how the governor’s book deal and handling of coronavirus nursing home death numbers are intertwined on Tuesday.

“What are the book sale financial incentives behind Cuomo’s alteration of COVID nursing home report? The public has a right to know,” Kim wrote on Twitter.

“On page 334, Cuomo writes that New York was number 46 out of 50 in the nation when it comes to a percentage of deaths in nursing homes. That’s an absolute lie,” Peter Arbeeny said. “He insulted my family, he insulted my intelligence, he insulted the entire city by coming out with a book. That was my call to action.” 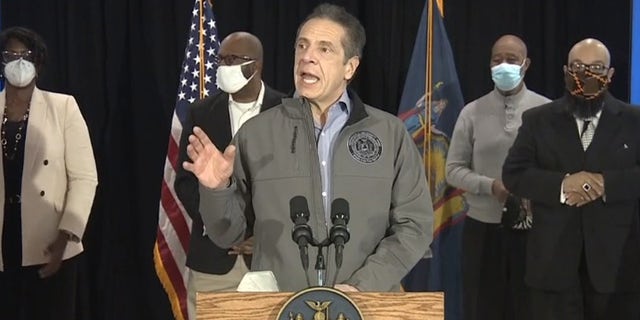 Cuomo took questions during a press call on Tuesday. Beth Garvey, acting counsel to the governor, answered when Cuomo was asked about the alleged coverup of nursing home death numbers.

“No one from [Executive] Chamber ever altered fatality data. There was a different data set that was analyzed and ultimately the data set that was published confirmed the same conclusions that the unverified data set did,” Garvey said. “The March 25 advisory was not a primary driver in deaths in nursing homes.”

Despite Cuomo’s earlier efforts to chalk up the drama-filled weeks to partisan politics, as questions swirl around his handling of the pandemic continue, his administration was forced to admit recently that nursing home deaths had topped 15,000 – nearly 10,000 more than was originally reported by the state at the end of January.

“He owes us and the world an apology. Covid knows no political party,” Peter Arbeeny said. “The only one who made this political is Cuomo. Gov. Cuomo has to stop blaming [Donald] Trump for his own lies. Stop blaming Trump for your own lies. I’m done with it. I’m a Democrat.”

Fox News’ inquiry to Cuomo’s office was not returned at the time of publication.