Google is building its own town near its Silicon Valley headquarters, complete with parks, restaurants, and affordable housing

Google hopes to build a new, town-like campus near its Silicon Valley headquarters.

The company this month unveiled its proposal for Middlefield Park, a revamped 40-acre site in the city of Mountain View, California, where Google's main headquarters is currently based. The plan includes a parks network, retail space, office space, and even a public pool and sports field.

The tech giant also plans to add as many as 1,850 residential units, and the company says 20% of those units will be affordable housing. The housing commitment follows a $1 billion pledge Google made last year to housing in the Bay Area, which included repurposing some its land holdings to create 15,000 new homes at varying income levels, including homes intended for lower- and middle-income families.

Google's new campus plans come at a time when the future of offices is uncertain. None of the major tech companies has sent employees back to work in the US amid the ongoing coronavirus outbreak, and Google's itself isn't requiring companies to return to work until July 2021.

But Google isn't alone in reaffirming its commitment to physical offices. Last month, Amazon announced that it plans to expand its physical office space in six "tech hubs" across the US, investing $1.4 billion to build out the offices and adding 3,500 jobs.

And Facebook in August signed a deal for a massive new office in the Farley Building in New York City. The office space spans 730,000 square feet and Facebook said at the time it will be used to expand the company's engineering operations in New York.

While Google's plans are still in the very early stages, we got our first look at how the company is imagining its new campus. Take a look:

Google said in its master plan for the development that it aims to "create a complete community" where all of the amenities and services are within a 10-minute walk for residents. 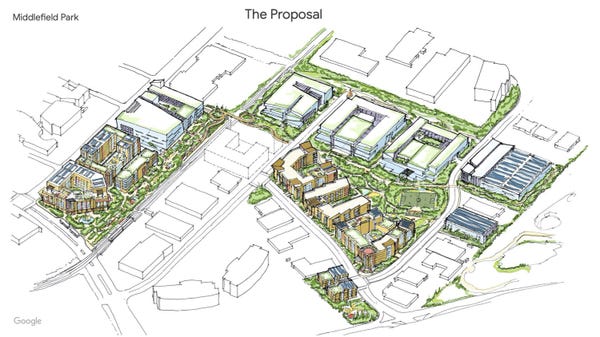 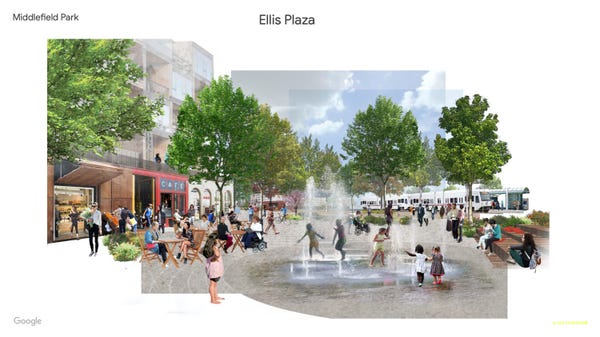 Google's plan will create 12 acres of public space, including a park network of six separate parks. The company says the parks will have space for playgrounds, outdoor fitness, bike paths, a community pool, a sports field, and a dog park. 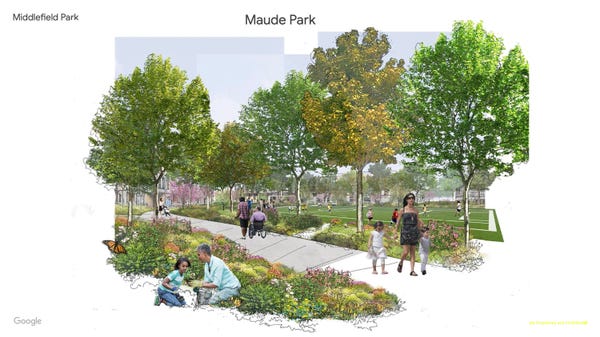 According to the Mountain View Voice, the Middlefield Park area currently has a significant amount of street parking that will be replaced by parks — the addition of 12 new parking garages makes that possible. 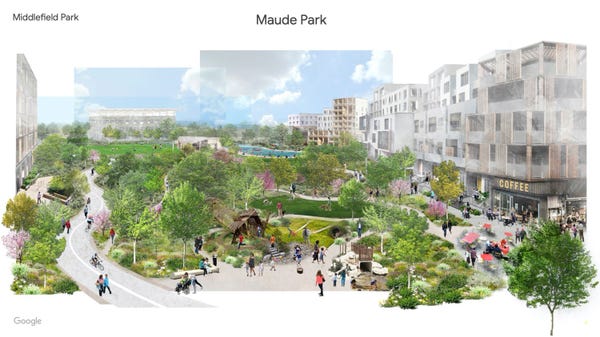 The proposal is still in its very early stages, and many of the buildings that will be constructed haven't been designed yet, according to the Mountain View Voice, but none of the buildings will be taller than 12 stories due to a nearby airfield. 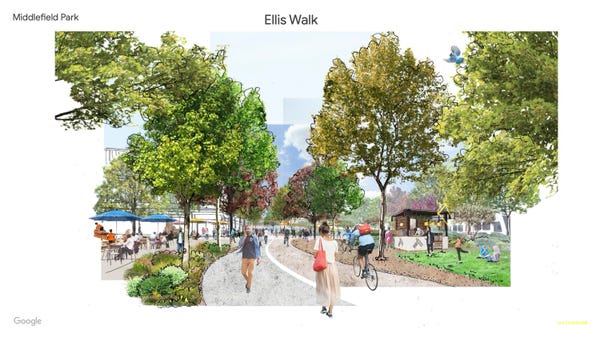