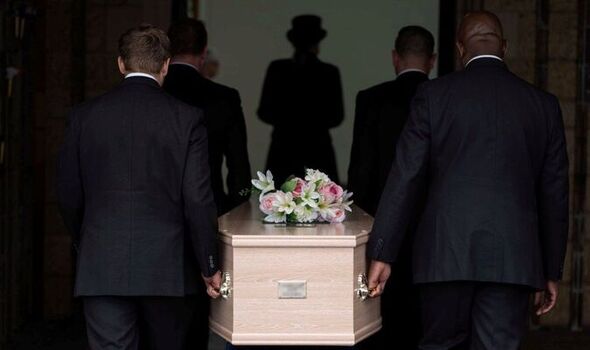 On average, those polled contributed £1,797.40 of their own money towards the cost of a funeral.

Among those who have experienced financial hardship, the cost of the send-off caused £1,951.90 of debt.

This had a significant impact on their mental health, leaving people feeling stressed (50 percent), anxious (45 percent) and embarrassed (36 percent).

Dan Garrett, CEO of direct cremation funeral provider Farewill, which commissioned the research, said: “The cost of living crisis is fuelling a cost of dying emergency.

“Grieving families all over the UK are having the stress of losing someone they love compounded by the devastating hardship of funeral poverty.

“Alongside steep hikes in supermarket prices and higher mortgage rates, it’s now far more likely that a death in the family could push grieving families into poverty as they struggle to cover the funeral bill.

“Having an affordable option such as direct cremation, with prices starting from £800, allows families the option to celebrate their loved one’s life in a way that feels right for them and the chance to grieve without the added pressure of costly traditions.

“With 85 percent of those polled worried about the impact the economic crisis could have on their ability to pay for a funeral in the future, it’s not surprising direct cremation is increasing in popularity.”

Since 2004, funeral costs have risen by 121 percent, with the average basic funeral last year costing £4,056 without the inclusion of traditional flowers, cars and catering, according to data from Sun Life.

Last year, 18 percent of families opted for a direct cremation – a cremation without the traditional service at a crematorium – up from 3 percent in 2019.

Farewill’s research, carried out via OnePoll, found a staggering 85 percent of people felt pressure to provide a traditional funeral service with things like flowers, cars and catering – even though it meant they experienced financial hardship.

In fact, 68 percent received monetary assistance from friends or family towards the funeral cost.

The most common help received included a financial gift (62 percent), interest-free borrowing (29 percent) and a loan with interest (12 percent).

Sadly, 47 percent sold a sentimental item given to them by a loved one to go towards the cost of a funeral, the most common of which was jewellery (34 percent), a watch (19 percent) and ornaments (18 percent).

The study also revealed the least well-off are having to make difficult decisions to cover funeral costs.

More than half (56 percent) of the poorest in society are buying cheaper food, compared to 31 percent in the highest socio-economic banding.

While 33 percent were buying less food, compared to just 24 percent of the highest banding.

Other difficult decisions facing people to help cover funeral bills include cutting back on electricity use (24 percent) and not putting on the heating (21 percent).

Dan Garrett, from Farewill, added: “The survey highlights how the burden of meeting rising traditional funeral bills impact our financial and emotional wellbeing.

“Direct cremation offers the freedom to give a loved one a simple, affordable send-off without the crippling costs associated with traditional funerals.”