Laura Ingraham sounds off on ‘The Ingraham Angle’

In her “Ingraham Angle” commentary on Tuesday, Fox News host Laura Ingraham warned viewers of the Biden administration’s continued efforts to use the power of the federal government and bureaucracy to intimidate political opponents and “frighten” voters into surrendering more of their liberty.

Ingraham warned that Attorney General Merrick Garland’s newly-announced “National Strategy for Countering Domestic Terrorism” is somewhat of a misnomer, that instead will act as a tool for the DOJ to suppress and punish critics of Democrats and the Biden administration.

“Filled with bureaucratic jargon, the ‘strategy’ is just a thinly-veiled effort to demonize the Democrats’ political opponents and frighten voters before the next election,” she said.

In his report, Garland relies on the January 6 Capitol riot to justify the White House’s wielding of power.

Garland’s proposals, she noted, will lead to less power for the working class and even more for the bureaucracy and its allies. 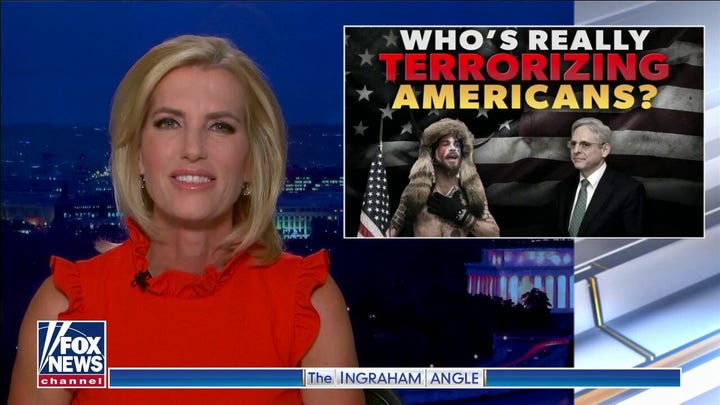 “In order to keep us safe from people like Chief Furball and his friends who were posing for selfies at the Capitol, Biden’s forces will team up with the same crew who helped them win in 2020,” she said, referring to Arizona man Jacob Chansley, who allegedly dressed up as a “shaman” when he illegally entered the Capitol.

“Expect to see armies of “fact-checkers,” and fewer independent sources of information that questions the status quo,” Ingraham continued, adding that Facebook CEO Mark Zuckerberg will likely be further empowered by this new agenda item.

“The Biden Administration is working to stoke division and resentment, by obsessing on phantom threats –all as a pretext to crackdown on individual freedoms,” she said.

In a clip from his announcement, Garland forcefully claimed that the “top domestic violent extremist threat” comes from White supremacists – adding that he predicts such threats will “continue to be elevated” going into 2022.

Ingraham went on to note that the larger plan from Biden calls for “reducing access” to so-called “assault weapons”, despite the fact “the Capitol clowns weren’t firing off any guns.”

“Big Brother needs to curtail your Second Amendment rights too,” she remarked.

Ingraham later said that Garland and Biden are greatly exaggerating their perceived threats in order to cow the public into assenting to a radical political agenda they cannot force through Congress.

Another tenet of the Biden-Garland plan is to use “civics education” to children to promote “tolerance,” with the host adding that the Delaware Democrat’s definition of “civics” is not the one most Americans identify with the term.