Is Rishi Sunak, the people’s chancellor, about to lose his crown?

When Sajid Javid was thrown out of No 11 in February 2020, few outside Westminster had even heard of his successor. Rishi Sunak had been an MP for less than five years, a minister for two, and had just a few months of experience in the cabinet in the relatively junior role of chief secretary to the Treasury.

Nor was Sunak helped by the manner of Javid’s departure – he resigned after Boris Johnson told him to sack all his advisers, a move Javid later said “no self-respecting minister would accept”. Sunak, in acquiescing to the decision, was portrayed as a young loyalist unlikely to ruffle any feathers.

Yet in the months since Sunak became chancellor, he has swiftly become the most popular politician in the UK, and Boris Johnson’s heir apparent.

The 40-year old is considered by many in his party to be the only reason the Tories continue to dominate Labour on the question of handling the economy. While Johnson’s team dithered over how to react when Covid-19 cases began to spiral, the team in No 11 was quick to assemble a programme of subsidies and loans for households and employers that was essential to rescuing the economy from collapse.

It has cost around £30bn to furlough 9.3 million workers, of which some 7 million were still at home last week. Business loans have cost the government upwards of £50bn.

The most eyecatching initiative was the £500m Sunak devoted to his “eat out to help out” scheme, which runs to the end of the month and subsidises restaurant meals from Monday to Wednesday. Quickly dubbed “Rishi’s dinners”, it was plastered across the front pages, illustrated by a beaming Sunak delivering food at Wagamama’s.

The scheme is not much more than a token gesture when the trade industry body UKHospitality estimates that sales at pubs, restaurants and hotels across the UK plunged by £30bn during lockdown, with revenues down by 87% between April and June compared with last year. But it has provided an injection of much-needed optimism, and was a highlight of Sunak’s summer statement in July, which was otherwise peppered with tragic forecasts of recession and job losses.

The plan also fitted neatly with Sunak’s casual image, honed on Twitter and Instagram ever since he posted a picture of himself working at home in a grey hoodie and trademark black-rimmed glasses, propelling him to prominence under the hashtag #dishyrishi.

Sunak’s appeal is no mere Westminster phenomenon. He has been the subject of numerous positive profiles in glossy magazines, including Tatler, and a fortnight ago, the Times even portrayed him with a halo. But while throwing money around has boosted his ratings, he may soon discover that dealing with a recession rarely helps a chancellor’s popularity.

Last week, the Office for National Statistics turned everyone’s attention back to the broader economy. It confirmed that Britain’s gross domestic product had fallen by 20.4% in the second quarter of the year. This was the worst performance in Europe between April and June, as well the worst among the G7 group of rich nations.

Sunak reacted by insisting his plan to end the furlough scheme in October and force companies to begin repaying government loans after a year remained in place, despite calls for an extension for the hardest-hit industries.

Among the Treasury’s chief critics is the Resolution Foundation thinktank. Its research director, James Smith, says the plaudits won by the Treasury so far could easily turn into brickbats. “Given we suffered one of the biggest economic downturns of any country, there is a need for the Treasury to signal it is prepared to do more,” he says. “The big risk is that the end of the furlough scheme will coincide with a rise in unemployment. If more people are out of work, it will create a huge drag on consumer demand and GDP growth, making matters worse.

“At the moment, there appears to be a ‘hope for the best’ attitude in the Treasury – a wait-and-see approach that poses a huge risk to the recovery.”

Sunak’s allies are acutely aware that his current popularity is a double-edged sword, with the danger of a backlash just around the corner. All he can do, they say, is try to make the right decisions, whether or not they’re popular. “He’s not sitting there thinking ‘how can I keep a 90% rating or 84% rating on [the Tory website] ConHome’ – he’s doing what he thinks is the right thing,” said one. 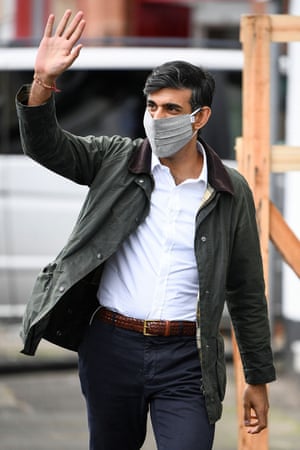 In response to the GDP figures, the chancellor said: “We shouldn’t pretend that it will always be possible for people to go back to the job they had, and in those situations it’s more important that we focus on providing people with fresh opportunity and have them look forward.”

That’s tough talk he may come to regret. It might sound friendlier than Norman Tebbit’s 1980s exhortation for the jobless to get on their bikes and look for work, but in midwinter, with the virus possibly wreaking havoc again, it might sound extremely callous.

For the time being, a series of employment subsidies for training, and for small businesses that hire new workers, provide the backbone of his post-October approach.

A recruitment splurge by the Department for Work and Pensions to double the number of Jobcentre career coaches to 27,000 is another feature, though one that has all the hallmarks of a test-and-trace-style failure. Only a few years ago, the DWP shed thousands of jobs advisers. Now ministers expect a fresh batch to be in position and aware of every potential career avenue within the next couple of months.

Sunak has an opportunity to revamp his plans in the autumn budget. He has denied that a second wave of the virus could scupper his set-piece tax-and-spending speech, which is also expected to provide a three-year budget plan for Whitehall departments.

However, such major reappraisals are not achieved overnight. And the chancellor is aware, Tory sources say, that some hard choices are now just weeks away. “We’ve got to take a sequence of decisions at different stages of the crisis that lead us back to a reality that’s sustainable,” said one.

Tory MP and former Treasury committee member Mark Garnier argues that his party needs to ditch its traditional belief that government spending should be modelled on a household’s finances, an idea popularised by Margaret Thatcher. A former investment banker, he says: “After 17 years in the City, I know you need to take on debt to get things moving. And there is a unique opportunity at the moment to press ahead, especially now that interest rates are at historic lows.”

Garnier believes the Bank of England’s willingness to lend the government what it needs should be used to full advantage.

“Should we have a ‘family finances’ attitude to balancing the books? The answer must be no.”

He says the Tory party should view the pandemic as a war, and recognise that debt will rise for some time while the country adjusts.

According to the Institute for Public Policy Research, 3 million jobs will still be reliant on the government’s furlough scheme by the time it closes. Its research, published today in the Observer, has found that a million of those jobs simply no longer exist in practice, as a result of the fallout from Covid and other changes in the economy.

However, it believes that two million jobs in hard-hit sectors will be viable in the long term and could be saved with a successor to the furlough scheme. It says an initiative similar to one started in Germany, which encourages companies to bring back workers part-time rather than laying them off, would cost £7.9bn to roll over into spring. As well as the government paying 60% of pay for unworked hours, it would also provide a 10% subsidy for hours worked part-time. However, entry to the scheme would be stricter, with businesses having to give proof of their longer-term viability.

David Bell, a professor at Stirling University and one of the country’s leading labour-market economists, says Sunak is unlikely to benefit from a V-shaped recovery because that would presume private-sector businesses in every industry can get back to previous levels of activity.

“The only way you can have a V-shaped recovery is if the economy could return to the way it was. Yet we know the pandemic is already creating all kinds of new demands that will mean the economy looks very different in a few years time,” he says. “How people go to work, where they live, and many other aspects of their lives are going to change, creating new industries and shrinking others.”

Bell believes the loss of 1 million employed and self-employed jobs since March is going worsen in the coming months, increasing the need for a well-funded scheme to retrain workers for those industries that will recover strongly and need staff.

For the past fortnight, Sunak has spent much of the time promoting his discount dinners scheme, mostly in his Yorkshire constituency, arguing that it is a serious attempt to protect two million people in the hospitality industry.

He has successfully batted away criticism that it contradicts the government’s new-found mission to tackle obesity. Whether the former hedge fund manager and alumnus of £40,000-a-year Winchester College, who has defied his privileged upbringing to reveal a common touch, has done enough to save the rest of the economy will only be clear in the autumn.

Much hangs on his budget – the future of Sunak, his party and, most importantly of all, the economy. 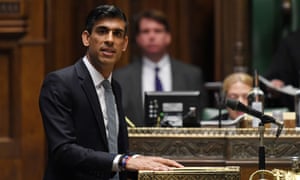 Six items at the top of Sunak’s to-do list

The subsidy that supported 9.6 million jobs began unwinding in August and ends in October. The £1,000 bonus to keep furloughed workers on until January is unlikely to be enough for many employers. Sunak has been under pressure for months to extend the scheme – how many viable jobs will be lost if he does not?

The UK has lost 750,000 jobs in six months despite the furlough scheme and 2.4 million began claiming universal credit in the first two months of lockdown, though not all of those will be out of work. Sunak increased the basic universal credit payment at the start of the pandemic, but that is due to run out next April. Will he give the likely record numbers of unemployed families a pay cut?

Repairing the economy and delivering the “build back better” plan will cost billions. Boris Johnson has ruled out tax rises, but will Sunak simply borrow and spend without backbench opposition? If he chooses a stealth option, who will he upset?

The spending taps are already being turned off, but the NHS, local government, social care and the “red wall” constituencies all expect attention. Sunak has already said no to some – but if Covid and flu combine to bring a deadly winter, what will he do?

“Dishy Rishi” has enjoyed sky high approval, which means there is a long way for him to fall. No politician has ever enjoyed permanent popularity. How can Sunak manage the inevitable fall when something goes wrong, or will he defy history and deliver an end to boom and bust?

Sunak is chancellor because Sajid Javid couldn’t stomach being told by Dominic Cummings which advisors he could employ. With Downing Street trying to wrest control of the levers of government, can he maintain the independence of the Treasury?