The boss of national retailer JB Hi-Fi has said he doesn’t believe rising interest rates will affect spending at his electronics chain as phones, laptops and tablets have become essential purchases for many consumers.

JB chief executive Terry Smart told the Macquarie Australia Conference on Wednesday that many of the products sold by the ASX-listed retailer were now “integral” to people’s lives, and that he didn’t expect consumer spending to falter even as cost of living pressures increase. 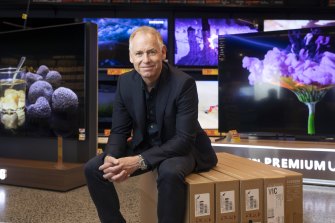 “A lot of our categories … are becoming less discretionary. People can’t live without it, it’s such an integral part of their lives that they’re continuing to buy,” he said. “We’re still going to see that, I would like to think, during [rising interest rates].

“And if it’s really going to get tough, we’re a discount retailer. Customers trade down to where they absolutely know they’re going to get the best deal, and that’s going to be both JB and The Good Guys.”

Smart’s comments come as JB Hi-Fi reported continued strength in its sales for the first four months of the new year, with trade at its Australian business increasing 11.9 per cent from January through to the end of April.

Revenue at the Good Guys was also up, gaining 5.5 per cent for the period, and the company’s historically troubled New Zealand business also performed well, increasing sales by 4.8 per cent. Morgans analyst Alexander Mees said JB Hi-Fi’s result was the best third-quarter result out of the major retailers so far.

“The evidence from discretionary businesses like JB, Breville and Super Retail yesterday paints a more positive picture of consumer spending in the face of rising inflation than share prices would have you expect,” he said.

“It wouldn’t be the first time the stock market has underestimated the resilience of the Australian consumer.”

However, despite this, JB Hi-Fi’s shares fell 4.3 per cent to $49.95 by mid-afternoon on Wednesday, as the company also warned investors about supply chain delays and inventory availability moving into the last quarter of the financial year.

Retailers across the board have warned about the effects of rising inflation, with both heads of major supermarkets Coles and Woolworths warning that customers could expect the price of their weekly shop to increase notably.

However, this was not the case for Smart, who said while JB had seen price increases flow through from suppliers over the last six months, the hikes were largely “hidden” in consumer electronics as manufacturers roll out new models that are naturally priced higher.

“[Inflation] is not going to impact our promotional activity going forward because we buy from multiple suppliers, they all compete against one another as well,” he said.

Smart also warned that JB’s famously low cost of doing business could take a hit in the months ahead as more and more customers return to shopping in-stores, requiring the retailer to spend more on staff to ensure service levels are up to scratch.

The Market Recap newsletter is a wrap of the day’s trading. Get it each weekday afternoon.