Mark Zuckerberg made a big mistake in picking Aussie fight

Australian rules football is a rough and tumble game. Umpires often have to work hard to prevent it from degenerating into an outright stoush, or brawl, between overheated players. By being drawn into a fight with Australia’s government, however, Facebook has clumsily miscalculated.

The proposed law forcing Google and Facebook to fork out for news content was poorly conceived, badly drafted and never likely to work effectively. Even so, Facebook’s ham-fisted and angry response – blocking news content not just from Australian news sites but from others headquartered in the country, as well as from government health and emergency service websites – may have backfired. 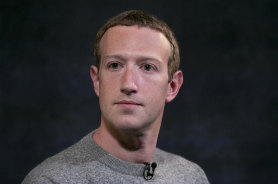 For Facebook, this could be a disaster CEO Mark Zuckerberg lives to regret.Credit:AP

That’s because, far from strengthening Facebook’s hand, the response – which appears to have been ordered personally by Mark Zuckerberg – has united and intensified international pressure against the company, already facing antitrust pressure for a break-up, and led to calls for others to adopt similar steps.

Sir Nick Clegg, Facebook’s PR supremo, on Wednesday scrambled to repair some of the damage, insisting the row was all the result of a “fundamental misunderstanding” over Facebook’s relationship with publishers. It may be too late. Canada could be next, with Justin Trudeau and Australian Prime Minister Scott Morrison already holding talks about a similar law governing Canadian news sites.

Oliver Dowden, Britain’s Culture Secretary, is also set to meet Facebook executives after Downing Street said it was “concerned” by the company’s actions. Other countries, including France and India, are studying the Australian regime closely, too.

For Facebook, this could be a disaster Mr Zuckerberg lives to regret.

In reality, the Australian spat is an early skirmish in what promises to be a bigger battle with the EU, UK and US governments over news and antitrust.

Whatever the rights and wrongs of the argument that big tech companies should help fund news organisations whose content they undeniably benefit from, the proposed Australian law was flawed and hardly a shining example of public policymaking. Amid heavy lobbying from Rupert Murdoch, the proposals had changed dramatically and repeatedly over the past six months and comprised measures that would have been physically and practically impossible for Google and Facebook to comply with.

This included a demand for 30 days’ notice, later cut to 14, for every change to Google search or Facebook news feed algorithms that are constantly adjusted, often dozens of times per day.

The law was also excessively broad and vague, covering not just news snippets and previews included on tech platforms but also simple links to articles. No real precedent exists for payments for links on the internet. The proposal would have forced Facebook to cough up every time a user posted a link to a news website in a private WhatsApp message, for example.

Equally important was the unusual way the law was framed. Instead of workable new legislation, it was wielded as a weapon to force Facebook and Google to strike commercial side deals with news providers in order to be exempt from it.

Benedict Evans, a tech commentator and strident critic of the law, believes this may have been the intention all along. By crafting legislation that was effectively impossible to comply with while at the same time creating a provision for Canberra to designate which companies were exempt, Australia’s government effectively established a hidden subsidy regime, funded by Big Tech, for politically connected news providers whose revenues have plunged.

Although the law was due to be passed this week, Facebook and Google will now be exempt because they have agreed to strike private commercial side deals with news providers under terms that remain confidential. Can this really be the best way to work with Silicon Valley to create a better funding model for financially stretched news organisations? It does seem like an odd and roundabout approach.

Either way, if Facebook’s opposition to the law was fair, its impetuous response has been a public relations disaster. Its threatening behaviour perfectly illustrated a size and power great enough to stand up to nation states. That won’t do Facebook many favours in the court of public opinion, and not just in Australia.

For this, Facebook can thank its belligerent Mr Zuckerberg, whose unhealthy command of the company remains its biggest challenge. With control over 60 per cent of Facebook’s voting shares, Facebook’s founder and chief executive exerts an iron grip that is itself seen as detrimental by many.

This is likely to be a growing problem as governments look closely at how to rein in Big Tech. It is Facebook that is arguably in their sights more than any other.

In reality, the Australia spat is an early skirmish in what promises to be a bigger battle with the EU, UK and US governments over news and antitrust.

If Facebook fails to moderate its stance and find a way to better win over politicians and the public, that may make it the front-runner for antitrust remedies explicitly designed to curb its power, including a possible break-up.