McDonald's global comparable sales tumbled 22.2 per cent in March and the burger chain pulled its full-year forecast as coronavirus-related lockdowns forced it to shutter stores and stick to delivery or takeaway.

The company, one of the first major fast-food chains to provide a glimpse into the economic impact of the health crisis, said it had raised $US6.5 billion ($10.4 billion) in the quarter and suspended share buybacks to bolster its cash reserves. 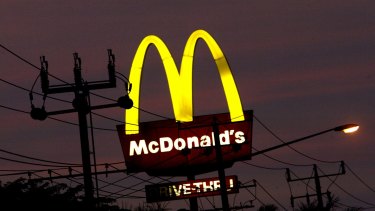 McDonald’s is one of the first major fast food chains to provide a glimpse into the economic impact of the health crisis.Credit:Glenn Campbell

It provided the update, including quarterly sales results, ahead of its planned earnings announcement on April 30.

In March in the United States, when COVID-19 cases began to skyrocket, McDonald's sales fell 13.4 per cent as authorities asked people to stay home and required dining rooms to shutter to curtail the spread of the virus.

It has now infected more than 1.3 million and killed over 81,000 globally.

About 75 per cent of McDonald's 38,000 restaurants around the world were operational during the quarter, the majority of which adapted to focus on drive-thru, delivery or take-away, chief executive Officer Chris Kempczinski said.

"This unprecedented situation is changing the world we live in, and we will need to adapt to a new reality in its aftermath," Kempczinski said in a statement.

The steep drop in March led to a 3.4 per cent fall in comparable sales for the three months ended March 31 globally, compared with the 0.91 per cent drop analysts on average had expected, according to IBES data from Refinitiv.

However, a few of the brokers surveyed by Refinitiv had not updated their estimates to include the impact of the coronavirus in the consensus.

Still, Wall Street analysts said strong sales at the start of the quarter, when global same-store sales rose 7.2 per cent, could mean the company may soon recover.

McDonald's said it would defer rent and royalties for its franchisees, who are already facing difficulties due to the outbreak and are burdened with other expenses like restaurant renovations as a part of the company's push to modernize stores.

The company said it expects to reduce capital expenditures by about $US1 billion for 2020 due to fewer store renovations in the United States and fewer restaurant openings around the world.

McDonald's said the cancellation of its Worldwide Owner/Operator Convention due to the health crisis could cost about $US40 million due to refunds.

The Chicago-based company's shares closed nearly 2 per cent higher amid a bounce in the broader market.