Elon Musk can’t afford too many more days like Tuesday.

That’s when his stake in Tesla tumbled by more than $US32 billion ($46 billion), after the electric carmaker’s shares plunged by the most since September 2020. 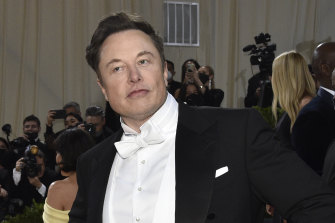 Elon Musk can’t afford too many more days like Tuesday.Credit:AP

For Musk, this kind of volatility isn’t new. Sharp declines have hit Tesla’s stock periodically over the past two years, but have been offset by even larger gains, a trend that has catapulted him to the top of the list of the world’s richest people.

This time, however, there’s more at stake for Musk, who is just about 24 hours removed from announcing an agreement to buy Twitter for $US44 billion in one of the largest buyouts in history.

To finance the deal, Musk, 50, agreed to $US13 billion in bank financing backed by the social-media company, $US12.5 billion secured by some of his Tesla stake and another $US21 billion in equity. Based on Tesla’s closing price on Monday, he could cover his margin loan and still own unpledged shares worth about $US21.6 billion — almost enough after taxes to sell and fund the cash portion of the deal.

That wiggle room has shrunk after Tesla shares fell 12 per cent to close on Tuesday at $US876.42. He still has more than enough to secure the margin loan, but at the current price he would have just $US11.4 billion left over in unpledged shares. If the stock fell below $US740, which it last did for a brief moment on February 24, Musk wouldn’t have enough to cover the full $US12.5 billion, according to Bloomberg calculations.

“Musk is taking a good deal of risk by using Tesla shares as collateral,” said Russ Mould, investment director at AJ Bell. “If the electric carmaker’s shares were to unexpectedly crater, that could create a lot of discomfort.”

Musk is the world’s richest person, with a fortune of $US252 billion, according to the Bloomberg Billionaires Index.

His overall wealth only fell by $US5.5 billion on Tuesday, cushioned by a gain of millions more Tesla options under a 2018 “moonshot” award that promised to pay out if Tesla hit various performance benchmarks, such as net income and revenue. The company has sailed through most of those. It reported better-than-expected earnings just last week, with Musk projecting production will grow at a fast clip for the rest of 2022.

That moonshot has taken a hit, too. The three tranches of his 12-tranche options award that vested on Monday are worth $US20.4 billion, down $US3.1 billion in value in a day.