Pandemic could slay zombie companies that staggered through GFC

Government and central banks around the world are throwing everything they can conceive of at the economic fallout from the coronavirus. Will that be a lifeline for zombie companies or will the pandemic sound their death knell?

Back in 2017, the Organisation for Economic Co-operation and Development created a stir when it published a paper entitled The Walking Dead? Zombie firms and productivity performance in OECD countries. 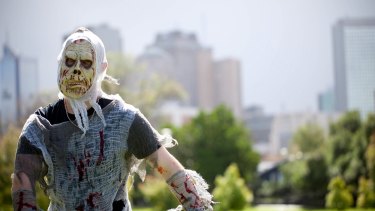 A zombie at Melbourne’s annual zombie shuffle in 2016.Credit:Arsineh Houspian

The thesis of the paper – and of subsequent research by the OECD and the Bank for International Settlements – was that there were reasons to suspect that companies that were otherwise non-viable had been kept afloat by actions taken by central banks and others in response to the financial crisis in 2008.

The survival of those companies may have, it posited, crowded out growth opportunities for more productive companies. In effect, the open-ended supply of credit at unprecedented low interest rates had frustrated a central element of market capitalism, what Austrian economist Joseph Schumpeter termed "creative destruction".

The BIS defines zombie companies as those listed companies with a ratio of earnings before interest and tax to interest expenses of below one. Its latest estimate is that about 12 per cent of listed companies in the OECD don’t cover their interest costs, although the proportion is significantly higher in southern Europe and the US.

In the local market the proportion of zombies is estimated at about 12 per cent – some estimates are higher – and in the US at about 16 per cent.

Rates have fallen back to around zero, if not below, in most of the developed world, and central banks are effectively unleashing "QE to infinity", as the US Federal Reserve’s response to the coronavirus has been dubbed.

The Fed is pumping liquidity into financial markets and, beyond buying Treasury bonds and mortgages as it did in its post-GFC quantitative easing programs, will also backstop lending to companies, including small business and consumers, and may even buy securities in mutual funds and exchange-traded funds.

The problem for the zombies is that they were alive before the pandemic only because rates were so low and credit was so plentiful and undiscriminating. Now, ultra-cheap credit may be even more abundant but they are facing massive losses of revenue and income.

The most obvious scenario, despite the commitment of governments and central banks to support business, is that the coronavirus will do what the global financial crisis failed to do and purge the zombies from the system.

The alternative is that the "whatever it takes" attitudes of governments and central banks will keep alive companies that really shouldn’t survive.

In systems, like ours, where the banks will actually have to evaluate whether businesses have the capacity to re-emerge from near-total shutdowns of up to six months, if not longer, some tough decisions will have to be made.

Sectors which were hanging on in the face of enormous and disruptive structural change ahead of the pandemic – retail is the most obvious – are going to look very different and be much smaller when this crisis ends.

The energy sector, particularly in the US, is another, with shale oil and gas producers being hit by the coincidence of supply and demand shocks with the outbreak of a price-war and consequently a near-vertical plunge in oil prices. At the current oil price of $US23.50 a barrel, few, if any, of those companies can get even close to break-even.

The broader problem is that the post-GFC environment encouraged a massive increase in global debt and, in particular, of riskier leveraged lending.

Non-financial corporate debt has more than doubled since 2008 to about $US13.5 trillion ($22 trillion), while leveraged loans have climbed to more than $US1 trillion.

Private equity companies were paying around six times their target’s earnings before interest, tax, depreciation and amortisation before the coronavirus struck but those multiples can't be sustained when revenues and earnings disappear almost overnight.

The Morrison government has talked about businesses hibernating during the lockdown and then a rebound when the economy re-opens.

That’s fine for those businesses with sustainable models and balance sheets that the banks and government can be comfortable supporting in the knowledge that, over time, they can restore their viability but what about those that came into this crisis barely solvent?

Do they warrant, and will they receive, taxpayer and bank shareholder support?

In the post-crisis era, the assumption of investors was that the central banks would underwrite the risk of investing in even the riskiest of debt, allowing them to chase yield without having to price the risk.

Generally, they were proven correct and that assumption enabled the massive increase in global corporate debt despite the generally anaemic condition of the underlying developed world economies.

Despite the "whatever it takes" approach by governments and central banks, the combination of the economic and financial crises the pandemic has spawned may prove to be too much for suddenly risk-averse investors to ignore, and too much for many of the zombie and over-leveraged companies to survive.

Get our Coronavirus Update newsletter for the day’s crucial developments at a glance, the numbers you need to know and what our readers are saying. Sign up to The Sydney Morning Herald’s newsletter here and The Age’s here.