Medical imaging firm Pro Medicus will double down on global research and development efforts in cloud and artificial intelligence, keen to keep momentum after starting 2021 with share price gains of 25 per cent.

Investors have been favouring the Melbourne-based medical technology firm in recent weeks as the company confirmed six new major contracts from US hospitals over the past six months, sparking hopes for a profit bonanza. However, the vast majority of revenue from those contracts, worth more than $130 million, has not yet started to flow through.

The business reported a net profit increase of 12.4 per cent to $13.5 million for the six months to December, with revenues up 7.8 per cent to $31.6 million for the half. Investors seemed underwhelmed by the result and were taking profits, with the stock opening 16 per cent lower to $38 after the numbers were released, before settling down 3.3 per cent at $44.13 by early afternoon. 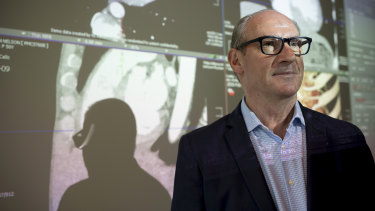 Chief executive Dr Sam Hupert and his co-founder Anthony Hall are major shareholders in the business, with Dr Hupert owning 27 per cent of the company. The share price run-up over the past few months has seen the value of his holding surpass $1 billion.

He said the company, which offers software tools to radiologists to help them process and visualise scans, was a beneficiary of the “data explosion” in global healthcare systems. Coronavirus had shown the value of the company’s software platform giving doctors access to medical imaging remotely, he said, with many health professionals realising that “if they weren’t able to read [medical images] at home, that was a huge problem”.

His current focus is on expanding the company’s reach in the US, where it continues to seek out new deals to roll out its technology. Pro Medicus, which has just three sales representatives for the whole US market, has been working on building strong relationships in the tight-knit world of radiology where radiologists usually know each other, Dr Hupert said.

It’s word-of-mouth momentum which the company hopes will encourage conversations with new clients as big names like University of California Los Angeles start to use the firm’s technology.

Having launched in Melbourne in 1983, Pro Medicus is now working on research and development projects in Australia, Germany and the US. Dr Hupert is banking on the growth of cloud and artificial intelligence (AI) as trends that will come to reshape medicine globally.

Earlier this month, Pro Medicus received US Food and Drug Administration approval for an AI-driven breast density tool, which can be used with imaging systems to help radiologists understand and categorise breast tissue composition. Dr Hupert said the US provided an ideal environment to continue research into these kinds of tools, with hospitals having large budgets for innovation.

RBC Capital Markets analyst Garry Sherriff said given the stock’s rally over the past month, it appeared investors had been hoping for even more, although the result beat the analyst consensus forecast.

“Only a small fraction of revenue from recent contract wins is currently flowing, with management expecting a large step up in [the next financial year] on roll-out of contracts won in the last 12 months,” he said.

The company will pay a fully franked dividend of 7 cents a share.