Speedcast identifies the hurdles as it staves off collapse

Debt-laden satellite broadcaster Speedcast has identified the daunting hurdles in front of it as the company attempts to stave off collapse after revealing on Monday it made an unaudited loss of $US459.8 million ($748 million) last year including $US413.8 million worth of write-downs.

The company, which had $US669 million worth of debt as of December 31, reported that total liabilities exceeded total assets by $US202.7 million as of that date.

Without resolution of the liquidity and recapitalisation issues, the company said “there exists a material uncertainty that the group will be able to continue as a going concern”. This includes bridging finance to "allow Speedcast to continue operating and progress its recapitalisation and restructuring to reduce the overall leverage of the company". 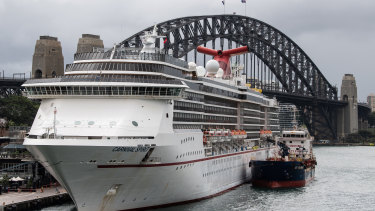 It also includes negotiating terms of a forbearance agreement with its lenders. The forbearance is in relation to interest and amortisation payments due on March 31 and the breach of any debt covenants as of last year. It is also negotiating with suppliers for overdue payments.

Speedcast provides satellite communications services to remote sites such as cruise ships, mining operations and oil rigs. It also counts the NBN as a significant customer.

The board said it had prepared the accounts on an ongoing basis on the assumption that Speedcast would succeed with its forbearance agreement, required funding and recapitalisation, but noted “there is no guarantee that all of these initiatives will be achieved”.

The company has stated previously that Moelis is advising it on funding and recapitalisation alternatives given the fact that current equity market conditions preclude a meaningful equity raising.

The debt-laden company’s shares remain suspended until accounting firm PwC completes the audit of this result which has been under board scrutiny since a profit downgrade last month which triggered the resignation of its chief executive Pierre-Jean Beylier.

Speedcast said last week the coronavirus had had a "substantial impact" on one of its core markets — cruise liners — and as a result, the company was "not yet able to provide a reliable outlook for the performance of the business" for the current financial year, which ends on December 31.

On Monday, the company said it was seeing virus-related impacts across a range of customers and business segments.

The company also said the Australian Securities and Investments Commission had forced the company to restate its previous year's revenue meaning the prior year’s $US1.9 million net profit is a $US6.8 million loss.

"Speedcast has agreed to change its accounting policy and restate the FY18 comparatives in this financial report in line with ASIC’s interpretation," the company said in a note to its accounts.

"The restatement does not impact the total amount of revenue that will be recognised by the company, and that the company will receive under the contracts, but simply the timing of the recognition of the revenue."

Shares have been suspended since January 31 when they last traded at 79¢.