(CNN Business)While calls for coverage focused more on policy and less on personality are sounded often in media critiques, rarely has the need been so apparent as in the coverage the last month of Elon Musk’s move to buy Twitter (TWTR).

While those of us in the media have been chasing Musk’s mercurial tweets, we have been distracted from the burning need for a serious, thoughtful, society-wide, grownup discussion about reform of social media, particularly as it involves government regulation and the First Amendment. 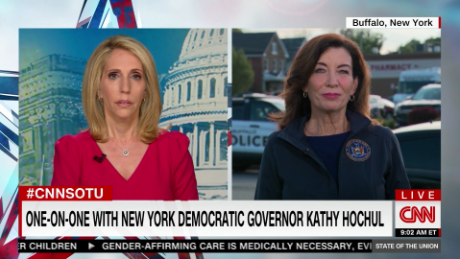 Reformers, citizens, academics and politicians have been warning for years about the dangers of unregulated social media. From documentation of Facebook’s role as a prime platform for Russian disinformation in the 2016 presidential election, to shocking whistleblower revelations about Instagram’s supposed effects on teen self-image, the list of complaints has only grown. Most recently, the call for social media accountability came from New York Governor Kathy Hochul, who spoke about it at a news conference after a racist shooter posted to platforms a hate-filled screed with minute-by-minute plans to shoot up a supermarket in Buffalo.

Yet almost nothing has been done about it.

In fact even as tech executives like Microsoft President Brad Smith and political leaders like former President Barack Obama have voiced a need for some form of oversight in recent weeks, more vigorous content moderation on one of the world’s largest platforms seems more uncertain than ever with Elon Musk saying that if he gains control of Twitter, he will move it to a more “absolutist” notion of free speech. One idea he floated last week to much media attention: letting former President Donald Trump, who was banned in the wake of the January 6 insurrection, back on. That was before his Friday tweet that the $44 billion deal was now on hold over how many of the platform’s accounts were spam or fake.

Musk’s arrival last month at centerstage in the debate about social media regulation has mainly led to more heat and volume and far less light and clarity as his tweets and personality became the focus of media coverage and social media conversation rather than the issue of how we as a nation are going to make social media serve democracy rather than become part of a force that could destroy it.
Even as Musk pledged a far more hands-off policy on enforcement when it comes to banning figures like Trump, he asserted last week that he is “on the same page” with the European Union’s new code of content moderation, which aims for stricter policing of disinformation. Really? It is hard to know where he really stands — when he is being serious or when he is trolling. Or when, perhaps, it seems as if he might just want to see how huge a reaction one of his tweets can get, like the one on Friday that initially sent the price of Twitter shares tumbling 13 percent.

In recent weeks, Musk has largely controlled the conversation about social media with his tweets and public comments, siphoning off attention from a deeper discussion about reform, moderation and the First Amendment.
Serious reform proposals are being offered.
“The idea that a handful of platforms can continue to make their own behavioral rules even when those decisions harm the public interest is no longer sustainable,” Tom Wheeler wrote on Tech Tank at the Brookings Institution where he is a visiting fellow.
As former chair of the Federal Communications Commission under Obama and president and CEO of the National Cable Television Association, Wheeler has extensive experience in the realpolitik of government and media regulation.
He is proposing a new government agency that “has digital in its DNA” rather than one that “tries to bolt new responsibilities onto analog era agencies,” he said in an interview last week.
The idea is for that agency to try to facilitate a conversation among providers, consumers and the government on a set of “behavioral standards” for the tech companies.
“How that would work would by an enforceable code of conduct” for the tech providers that says, ‘This is how we agree to behave,'” Wheeler explained. The new agency would enforce that behavior.
Sen. Michael Bennet (D-Colorado) introduced a bill Thursday to create such an agency. It demands serious coverage and discussion even if we think the divided Senate will never pass it. The Digital Platform Commission Act would create a five-member body of commissioners selected by the president and confirmed by the Senate.
The Federal Digital Platform Commission he is proposing “would have the mandate, jurisdiction, and broad set of tools to develop and enforce thoughtful guardrails for a sector that has been left for too long to write its own rules, with serious consequences for everything from teen mental health to disinformation to anticompetitive practices that have hurt small businesses,” Bennet said in a statement. “It’s past time for a thoughtful and comprehensive approach to regulating digital platforms that have amassed extraordinary power over our economy, society, and democracy.”
Most other proposals involve changes to Section 230 of the Communications Decency Act. One of the things this law does is absolve online platforms of responsibility for the speech of their users.
Obama, who focused in a speech last month on the dangers of misinformation and disinformation, suggested that the law be changed to require more curating of content including ads. But while some Democrats believe there is not enough gatekeeping on the sites, some Republicans believe there is too much and that it is biased against their voices. Finding enough consensus in Congress for action is a tall order.

But such bill proposals, as well as the new standards of regulation from the European Union, deserve more study, discussion and debate — all of which mainstream media can provide through its agenda setting powers.
More of that, and less celebrity style chatter about Musk. A month is more than enough to be distracted by him. The midterms are almost upon us, and you can bet social media will again play a role with misinformation, disinformation and lies.
Source: Read Full Article