The Swedish electric vehicle manufacturer Polestar plans a $US20 billion ($27.6 billion) listing. Sir Jony Ive, the creative genius behind Apple, is working on designs for Ferrari. Rolls-Royce is launching its first electric vehicle, while, at the other end of the market, Ford is pouring $US11 billion into batteries as it switches away from fossil fuels. And that is just in the last week. With every month that passes, more and more rivals are jousting for a slice of the booming market in electric vehicles.

Can any of them seriously hope to topple Elon Musk’s mighty Tesla empire? It may seem to have an impregnable lead, but technology can move very fast. Rivals can still undercut it on price, they can outperform it on technology, especially by increasing the range, and perhaps most of all, there is room to radically redesign what a car looks like. There is still everything to play for – and the battle for dominance is already shaping up as the most fascinating industrial contest of the decade ahead. 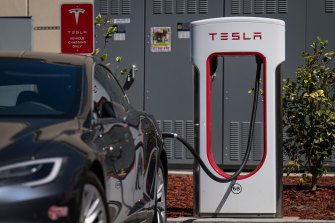 Elon Musk’s Tesla is the clear market leader, but will it last?Credit:Bloomberg

In the space of a few years, Tesla has gone from an eccentric start-up – and admittedly it is still quite an eccentric company – to the dominant force in its industry. True, Toyota and Volkswagen sell a lot more cars, but they have nothing like the same market value. The stock market has already made its judgment clear. Electric vehicles are the future, and that market will belong to Tesla. A few rivals may nibble around the edges, but it is the clear leader, and no one else can come close now.

The first part of that judgment is certainly correct. In a decade, petrol-driven cars will be a relative rarity (which will no doubt come as a relief to anyone who has tried to fill one up this week). But the second part? That is more open to question.

Plenty of companies are vying for a share of a market that, according to one estimate, will be worth $US1.2 trillion a year by the end of this decade. The Chinese-owned Swedish manufacturer Polestar announced plans to go public this week, through a special purpose acquisition vehicle, joining rivals such as Arrival and Nikola. Sir Jony, the design genius behind the iPad and iPhone, is teaming up with Ferrari to create an electric car, and that partnership could in time extend to Fiat as well. Rolls-Royce, owned by BMW, will put its first battery-powered vehicle on the market by 2023. All the big manufacturers are planning their own ranges, with launches coming thick and fast. In reality, the battle for the electric car market is just getting going. The interesting question, however, is this. Can any of the challengers take on Tesla?

Tesla is way out in front. And yet, the companies vying for a slice of the market aren’t crazy, and neither are the investors backing them. It would be rash to assume another challenger won’t emerge, and may even topple it. The industry is still wide open, for both companies and investors.

True, Elon Musk’s giant is way, way ahead of the rest of the pack. It has the technology and the brand, and while plenty of rivals can copy the former the latter will be very hard to match. And it has the money. With a market value of $US773 billion it is worth far more than any of its rivals. No one is going to be able to outspend it, that much is for sure. That said, technology is fast moving. Nokia dominated mobile phones 20 years ago, and was briefly Europe’s biggest company, but it still got crushed by smarter rivals. In the 1960s, Japanese car manufacturers such as Toyota and Honda were a joke, but over a couple of decades they ripped past the American and European giants. In truth, Tesla can still be challenged. Like how? Here are three key weaknesses.

First, price. Tesla is still making a premium product. The cheapest on the market, the Model S, costs close to £40,000. It is edging into the mass market, but it started as a luxury product, and that will be hard to change. Lots of people just want something cheap and reliable to run them around town, not a status symbol to impress the neighbours on the driveway. There will be plenty of demand for the first electric vehicle manufacturer who serves that market.

Next, range. The one thing anyone buying an EV cares most about is how far they can get without having to plug in and charge up. Cracking range was Tesla’s real secret, but there is still a huge scope for dramatically increasing the distance between charges. Car battery technology is still in its infancy, and rivals can easily overtake it – the first 1,000-mile battery will be a sensation.

Finally, and perhaps most significantly, design. All the electric cars on the market right now look just like petrol vehicles, except with a battery where the engine was. Even the charging point is often where the petrol cap used to be. While that may have helped initially, creating a familiar look for consumers, there is still space for someone to radically rethink what a car looks like. Indeed, that is what will make Sir Jony’s work for Ferrari so interesting. He dramatically changed the way phones looked and worked. Perhaps he can do the same with cars? And even if he doesn’t, someone else still can. 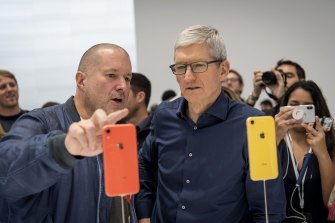 On top of all that, there may be one more factor as well. Musk is, and let’s put this as politely as we can, idiosyncratic in his style of management. While that has worked brilliantly so far, he may well end up making a massive strategic misjudgement. It is even harder to see him handing over calmly to a successor. In reality, electric vehicles will be one of the biggest industries of the next decade. In 15 years, there will be virtually no petrol-driven cars left on the road.

Right now, Tesla is way out in front. And yet, the companies vying for a slice of the market aren’t crazy, and neither are the investors backing them. It would be rash to assume another challenger won’t emerge, and may even topple it. The industry is still wide open, for both companies and investors.