The Capitol riot suspect pictured putting his feet up on Nancy Pelosi's desk had a tantrum in court, yelling 'it's not fair' that he's been jailed

A Capitol riot suspect who was pictured putting his feet up on Nancy Pelosi’s desk had a meltdown in court, yelling “it’s not fair!” at having to stay in jail, according to reports.

Richard “Bigo” Barnett — a self-described white nationalist — had the outburst during a Thursday hearing, in which he made it clear that he didn’t think he should be in jail ahead of his trial, the Daily Beast’s Pilar Melendez reported.

Court documents identified Barnett as the man pictured several times at the Capitol riot on January 6, both in the House Speaker’s office and outside, holding a letter that appeared to belong to her.

Pictures show him lounging on Pelosi’s office chair, taking selfies with his feet up and waving a letter around. 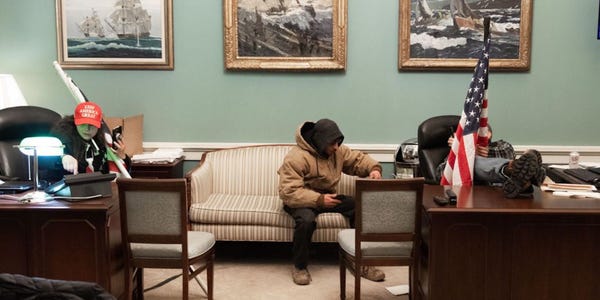 Later that day outside the Capitol, he talked to a reporter about the letter, saying: “I did not steal it. I bled on it because they were macing me and I couldn’t f—ing see so I figured I am in her office,” according to court documents.

“I got blood on her office,” he is reported to have said. “I put a quarter on her desk even though she ain’t f—ing worth it. And I left her a note on her desk that says ‘Nancy, Bigo was here, you B—-.'” 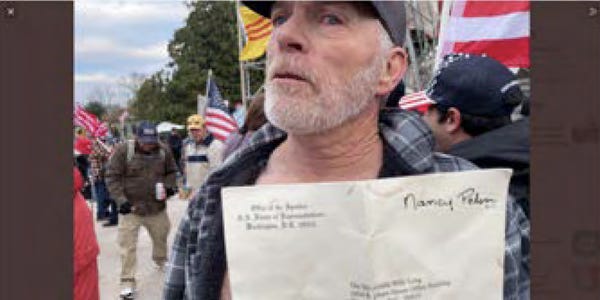 He has been charged on numerous counts, including entering restricted grounds with a weapon, violent entry and disorderly conduct, and theft.

Many people accused of joining the riot have been allowed to await trial at home, according to the Beast. But prosecutors have argued for Barnett’s pretrial detention because he was pictured carrying a stun gun, and attempted to evade law enforcement after the events.

He wasn’t happy at his Thursday hearing. “They’re dragging this out. They’re letting everyone else out,” he reportedly yelled, adding: “It’s not fair!”

“This has been a bunch of crap,” the Beast reported Barnett as shouting. He is said to have argued that “everyone else who did things much worse are already home.”

The judge paused the hearing after the outburst, and then ended it after Barnett’s lawyers said they planned to file a new bail hearing, the Beast reported. His next hearing is due on May 4.