'They are afraid of an educated woman': The Taliban's crackdown on female journalists

Kabul, Afghanistan (CNN Business)It’s a somber Thursday morning at TOLOnews, Afghanistan’s leading independent news channel. The staff was told the day before that the Taliban have ordered female presenters to cover their faces on air.

The devastating directive came on Wednesday from the Ministry for the Propagation of Virtue and the Prevention of Vice, which replaced the country’s Ministry of Women’s Affairs after the Taliban regained control of Afghanistan in August.
In the newsroom, headquartered in central Kabul, two presenters break down in tears in conversation with CNN.

“They want women to be removed from the screen. They are afraid of an educated woman,” says 27-year-old Khatera, who has been anchoring the morning news for the past five months.

“First, they deprived girls from going to school and then they came onto media now. I am sure, they don’t want the presence of women in general,” she adds. 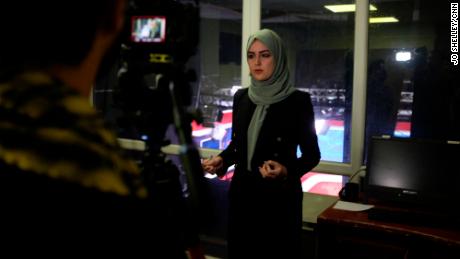 During Thursday’s morning editorial meeting, a group of around 30 staff, more than a third of them women, discuss the day’s news agenda. Feeds of TOLOnews and its two sister TV channels play behind them, alongside those of international news agencies.
Station director Khpolwak Sapai tells the team that he considered just closing down after receiving the directive, but then thought that female staff who are willing to anchor with their faces hidden should be allowed to do so.

Previously, female presenters had already adjusted to the Taliban’s takeover by moving their headscarves to hide their hair. 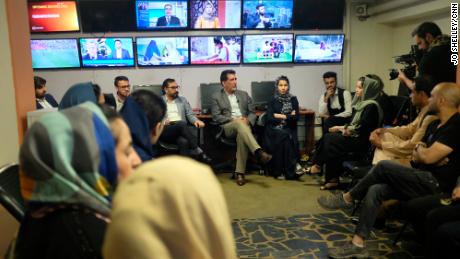 The international community has made clear that respecting women’s rights and girls’ education will be a key condition to the recognition that Afghanistan’s new rulers seek.
But many Afghan women fear what the future holds.
The latest directive adds to a long list of challenges that Afghanistan’s leading independent news channel has contended with over the past nine months, including seeing more than 90% of its staff flee the country following the Taliban’s arrival.
“All of my reporters that used to work in this room — all presenters, male and female — left,” Sapai tells CNN in an interview in his office. “And all the producers… All human resources working at TOLOnews left. At management level, “I stood alone,” Sapai says, “I was only thinking how to keep the screen alive [and] not to go dark… I can’t believe I did it.”
Amid the chaos, Sapai didn’t have time to be scared for his own safety as he focused on how to keep the lights on.
Now the network’s female presenters, who enjoyed their rights for 20 years, fear a steep slide backwards.
“What should we do? We don’t know. We were ready to the last to fight to perform our work, but they don’t allow us,” 23-year-old news anchor Tahmina says in tears.
“This is a psychological prison and demotivating,” she adds. “We don’t have the motivation to go on screen freely and openly.”
Her colleague Heela, who used to be on camera, is working as a producer now out of fears for her safety. 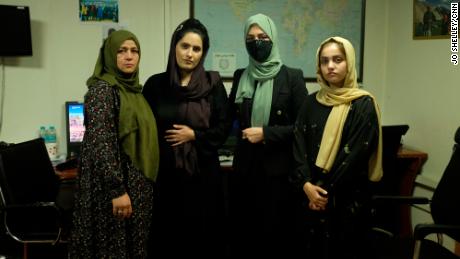 Her fears are not unfounded. In the past five years alone, 24 journalists have been killed in Afghanistan, according to data compiled by the Committee to Protect Journalists.
Still, the network hosts on-air debates about the Taliban’s dress code edicts and whether they’re Islamic. And they even invite Taliban officials to debate these issues, sometimes with a female presenter.

Across town, the Taliban government spokesman Zabihullah Mujahid attends a meeting with local journalists to belatedly mark World Press Freedom day, which was on May 3. We stop him on the way in to ask why women have to cover their faces.
“It’s advisory from the ministry,” he says. When asked whether it is compulsory, Mujahid replies that “they should wear it,” and likens it to the use of masks during the pandemic. “Like during the COVID pandemic, mask was mandatory.”
Source: Read Full Article