This startup founder has raised $75 million with a one-slide pitch deck. Here's why he thinks that's a winning strategy.

Many startup founders spend hours belaboring their pitch decks, trying to come up with the right combination and order of slides and information to attract investors.

Not so Michael Litt. His investor presentation is just one slide.

But to Litt, that slide, which features a chart illustrating his company's actual and projected annual recurring revenue, is the only one that matters. And investors seem to agree. Using that chart, Litt has been able to raise $75 million in funding for his company, Vidyard, across a seed round, three venture rounds, and a debt financing round.

"Every single time we've approached [fundraising] using this strategy, an investor has decided to ultimately write a check or issue a term sheet," Litt told Business Insider in an interview Monday.

It's helped that Vidyard has had a compelling chart to show. The Canadian startup, which offers software tools that allow companies to easily create, post, and share videos, has posted steadily increasing revenue growth and has a strategy — sketched out on the slide — to further boost its results.

Litt and his cofounder knew video was going to be big

Litt and cofounder Devon Galloway came up with the idea that became Vidyard about 10 years ago on a cross-continent trip from Silicon Valley, where Litt was working at the time, to Waterloo, Ontario, where they had gone to school together and where Galloway was then working. After catching up and running out of small talk, they started brainstorming startup ideas.

From their observations in the working world, they knew that digital video was becoming an important communication tool for companies, particularly for marketing to their potential customers and offering them support. But there wasn't yet a lot of video on the web and many companies lacked the expertise to create and produce it. They decided to create a video production company to cater to those businesses.

They had some success attracting customers. But many of their clients wanted something more — a way to put the videos Litt and Galloway had created onto their web sites. At the time, one of the most prominent alternatives for easily embedding a video on a website was to use YouTube. For corporations, though, YouTube had numerous disadvantages.

The YouTube video player carried YouTube's brand. The player that companies would embed in their sites linked out to the YouTube site, potentially luring customers away. And while YouTube offers companies aggregate data on who watched their videos, the Vidyard's clients wanted to know specifically which individuals were watching their videos and for how long so they could follow up with them or tweak their messages.

"YouTube was just simply not the best solution for these organizations and what they were trying to do with video," Litt said.

So he and Galloway decided to build some software to allow companies to host video on their own sites, without having to rely on YouTube. Eventually, after going through the Y Combinator accelerator program, they decided to drop their video production effort and focus on their software.

The company, now offers mobile apps and an extension for Chrome, and its software allows customers to record videos and easily post them on their sites. It also host videos for customers and will help them customize their recordings. And it helps client track and market to people watching the videos, integrating with Salesforce's customer relationship management service.

It offers its service to both small and medium-sized businesses and to enterprise-class customers. It sells its service on a subscription basis, but has a free version of its software that potential customers can try before signing up.

We "just focused 100% on building a video solution for marketers, for support and customer experience professionals and for sales people to help them turn viewers into customers," Litt said. "That was the total pitch."

That pitch has resonated with companies. Vidyard expects to have 10,000 paying customers within the next year, and it's added some 4.7 million individual, free users just since the beginning of March. The company, which has more than 200 employees, is already profitable, Litt said, and is plowing some its profits back into its own marketing efforts.

That kind of success has made it easier for the company to raise money through its one-slide presentation, Litt said. Relying on just one slide was a conscious decision to boil down a pitch deck to its most important component, he said.

"Every organization knows how to build a pitch and sell itself, but at the end of the day, what investors ultimately care about is the trajectory of the business from a financial perspective," he said.

To be sure, investors typically ask for more information before writing a check or sending over a term sheet. They'll typically do their due diligence by checking out Vidyard's audited financial data and talking with its customers.

But that's part of the thinking behind having a one-slide presentation, Litt said. The common wisdom in Silicon Valley is that to attract a venture investment, a founder needs to win over one of the venture partners.

Litt's strategy, though, is to target the venture firms' junior-level associates. They're the ones who typically research potential investments. If they're excited about the company, they can make a more compelling investments case than Litt thinks he ever could, because they know how to talk to and convince the partners. And they're motivated to push a deal, because that's how they advance.

"They'll build a better sales pitch than I ever could," he said.

Here's a version of the one-pitch deck Vidyard has used to raise $75 million in funding: 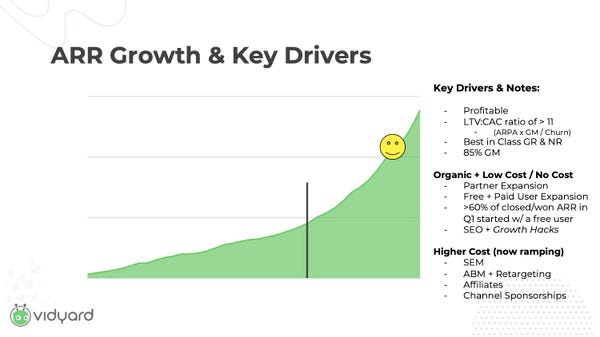 Got a tip about a startup or the venture industry? Contact Troy Wolverton via email at [email protected], message him on Twitter @troywolv, or send him a secure message through Signal at 415.515.5594. You can alsocontact Business Insider securely via SecureDrop.