Arkansas Senator Tom Cotton explains that Republicans are defending the Constitution and the voices of all Americans.

Arkansas Senator Tom Cotton delivered remarks on the Senate floor using only Sen. Chuck Schumer’s words to defend the filibuster in an attempt to highlight Democrats’ previous support for the filibuster when their party was in the minority. On “America’s Newsroom” Thursday, Cotton explained, as Schumer did in 2003, that his party is defending the Constitution.

FLASHBACK: SCHUMER SLAMMED REPUBLICANS FOR ATTEMPTING TO ‘CHANGE THE RULES’ ON THE FILIBUSTER IN 2003

SEN. TOM COTTON: It was the easiest speech I’ve ever given in my time in politics. I didn’t have to write a single word of it. I just repeated what Chuck Schumer said over the years about the importance of Senate rules and traditions and customs to respect the rights of the minority in the Senate. The Senate is a place where you have a sober second thought against sometimes transient or fleeting opinions coming from the House of Representatives. It’s played that role over our history. It needs to continue to play that role.

But if you’re looking for integrity and principled stands despite shifting partisan winds, Chuck Schumer is probably not the politician you want to look to. But what Republicans will do this week is to defend our constitution, defend our customs, to protect the voices of all Americans in our government. 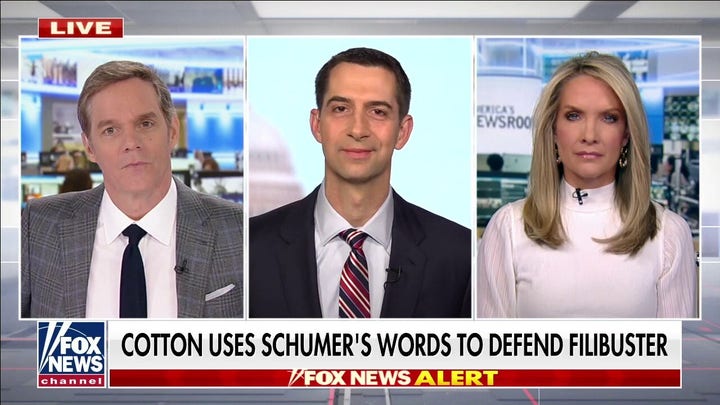