WASHINGTON — A new internal watchdog report finds that hospitals were unprepared for the coronavirus and are still scrambling to find equipment and deal with a shortage of tests — problems critics say could have been averted had President Donald Trump taken the pandemic seriously from the beginning.

From a lack of enough protective gear to fears of not having enough ventilators to worries about keeping staff healthy to financial concerns, hospitals are struggling to keep up with a “fast-moving” pandemic, according to a report Monday from the Department of Health and Human Services’ own inspector general.

“Hospitals reported that their most significant challenges centered on testing and caring for patients with known or suspected COVID-19 and keeping staff safe,” the report said.

Trump downplayed the severity and extent of the coronavirus for two months, falsely claiming that his travel restrictions against China had kept the disease from coming to the United States. He did not declare a national emergency until mid-March, which finally sent a signal to local governments and hospitals that federal funds would help them deal with the crisis.

“I think by the first or second week of February it was clear they needed to be prepping,” said Jeremy Konyndyk, who worked on the Ebola outbreak response under former President Barack Obama. “But the signal from the United States government never came.”

The report from HHS was self-generated, not requested by Congress. It points out that some of the issues it found are already being addressed by new guidance from HHS and the $2 trillion emergency legislation passed by lawmakers last month.

The office declined to comment on how things might have been different if the federal government had urged hospitals to prepare a month earlier as that question was not in the scope of the report. 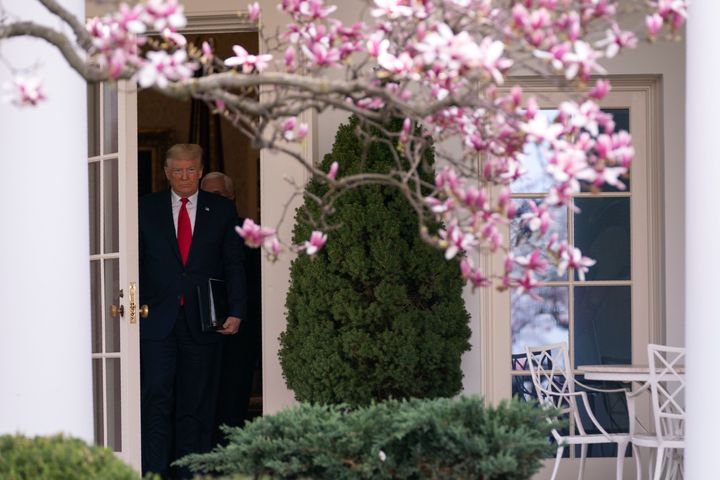 Nevertheless, the 41 pages, based on interviews conducted with 232 hospitals nationally over five days in late March, found a series of challenges for a health care community struggling to cope with a deadly respiratory illness with little warning.

Perhaps the single biggest problem was “severe shortages of testing supplies and extended waits for test results,” the report found. And the testing shortage, in turn, exacerbated other problems, such as the shortage of personal protective equipment, or PPE — including masks, gloves and face shields.

Because tests were either unavailable or taking a week or longer before returning results, hospitals were treating patients who had some COVID-19 symptoms as if they definitely had the disease.

“One hospital reported that its staff, at the time of our interview, used (on average) 307 masks per day for its 23 patients with suspected cases of COVID-19,” the report found. “Another hospital administrator said, ‘The testing turnaround presents a challenge, especially for our ‘rule-out’ patients … we have to use a lot of PPE on those rule-outs. And especially when it’s a negative, we basically used all that PPE for nothing.’”

The testing shortfall is also forcing hospitals to tie up precious beds with patients who wind up not having COVID-19 as well as sidelining staff who show symptoms but who also cannot quickly find out for sure if they have the virus.

The report also disputes a conspiracy theory Trump has more than once spread during his daily briefings: that the rapid depletion of protective gear was being caused by hospital staff stealing it and selling it on the black market.

“The administrator of one hospital stated that before COVID-19, the hospital’s medical center used around 200 masks per day and that it was now using 2,000 per day,” the report said.

Hospitals also complained that supplies they were getting from the national and state reserves were absurdly insufficient — “won’t even last a day,” said one — but were sometime unusable because of their age. Others said that the lack of a coherent national response had hospitals bidding against each other as well as members of the public.

“One administrator noted that masks that originally cost 50 cents now cost $6 apiece,” the report said. “Other hospitals reported concerns about vendors buying up supplies and selling them to the hospital at a higher cost.”

On top of everything else was the changing guidance from the federal Centers for Disease Control and Prevention on how to safely care for COVID patients, which sometimes conflicted with what state health departments were advising. One hospital administrator said: “It’s difficult when a doctor or nurse shows you legitimate information from legitimate sources and they’re contradictory.”

Konyndyk, who served in the United States Agency for International Development, said the warning signs were there for Trump administration officials to have urged a forceful response. “It was all there. PPE shortfalls, supply constraints, crisis care standards, limited hospital bandwidth. All it took was asking the right questions,” he said.

The White House declined to comment on the report, and referred questions to HHS and the CDC.